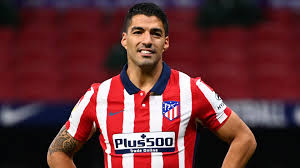 Atletico Madrid striker, Luiz Suarez, has named Paris Saint-Germain’s Lionel Messi as the player who should win the Ballon d’Or this year.

Suarez, a former club teammate with Messi at Barcelona, believes the Argentina captain deserves the 2021 Ballon d’Or after leading his country to win the Copa America this year.

According to the Uruguay international, Messi has no rival in this year’s Ballon d’Or.

Messi was recently named in a 30-man shortlist for the Ballon d’Or this year.

The 34-year-old forward has already won the Ballon d’Or for a record six times in the past.

Speaking with Olé, Suarez said, “I think Leo deserves to be the Ballon d’Or because he has had a spectacular year on a personal level despite only winning the Copa del Rey with Barcelona.

“Because in the Ballon d’Or you should not only look at what one has done in the year but also you have to see what he is like as a player, seeing what he does year after year. I think he has no rival.”

Man Utd vs Liverpool: Solskjaer speaks on resigning as manager after 5-0 defeat