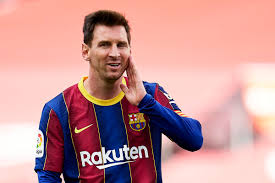 Barcelona have confirmed they have given Lionel Messi permission to go on an early vacation.

Messi did not train with the rest of the squad on Friday and will not play in their last LaLiga game of the season against Eibar.

Barca are out of the title race mathematically, with the title to be fought for between Atletico Madrid and Real Madrid on the final.

Messi will be on holidays ahead of the Copa America tournament next month.

His 30 strikes in LaLiga mean he is virtually assured of an eight ‘pichichi’ title as top scorer.

Producer raped me when I was 19 – Lady Gaga

“I have d right, as long as it’s legal” – Naira Marley reacts after getting bashed for his ‘fantasy’