Bayanni, the latest signee of the popular music producer, Michael Collins Ajereh alias Don Jazzy has shared his chat with the talent manager in utmost excitement.

Bayanni was unveiled amid jubilation yesterday, Tuesday, Aug 23rd, and his EP was said to drop at midnight. 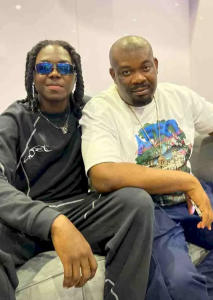 Taking to his Instagram page, Bayanni who claimed that he had been dropping freestyles since 2016 but got a message from Don Jazzy in 2019 that changed his life, chose to roll out a part of the chat.

Don Jazzy slid into his DM, greeted him in French language while stating that he liked some content on his page, and decided to chat with him.

An excited Bayanni speedily responded and this single message seemingly changed his life for good.

Check out the screenshot below: 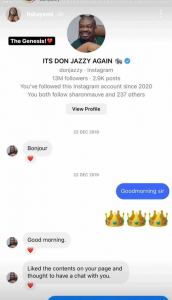