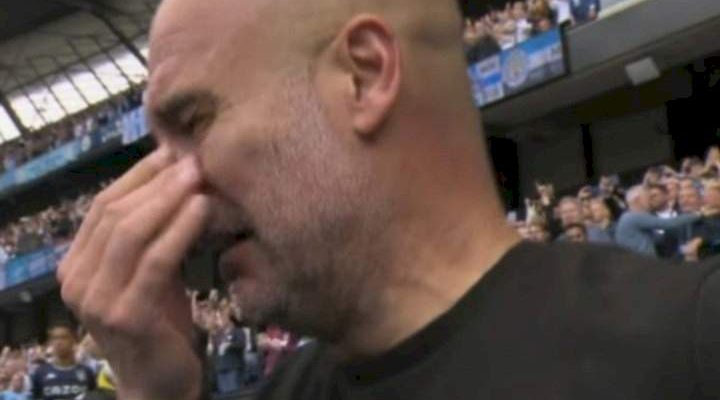 Manchester United legend, Gary Neville has noted that Pep Guardiola was in tears on Sunday because he could not cope with the joy of winning the Premier League title over Liverpool.

The Manchester City boss was in tears after his side pulled off an incredible comeback against Aston Villa to win the 2021/22 Premier League title.

With the title race coming down to the final day, it was a nervy first-half performance from both Liverpool and Manchester City.

In the opening three minutes at Anfield, a lacklustre Liverpool went 1-0 behind against Wolves.

Sadio Mane equalised with 27 minutes on the clock.

Meanwhile, over at the Etihad, Aston Villa were 2-0 up in the first half and it was looking like City were down and out until the introduction of Ilkay Gundogan.

In the space of five minutes, Ilkay Gundogan [2] and Rodri gave the Citizens a 3-2 lead.

Liverpool also went on to pick up a 3-1 win against Wolves thanks to goals from Mohamed Salah and Andy Robertson.

Moments after the final whistle, cameras panned over to Guardiola, who could be seen in tears after embracing his coaching staff and Nevile said, “Pep Guardiola can’t cope. That shot there of him crying says it all.

“The images of Pep Guardiola’s career will be him in tears at the final whistle today because he knows how hard his team have had to work to get there.

“Your fake life pass my own, aunty borrow borrow” – Bobrisky comes for Tonto Dikeh, calls her out over debt