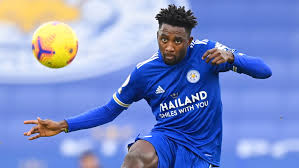 Leicester City midfielder, Wilfred Ndidi has been rated the best player in the Premier League and one of the best in Europe.

Trevor Sinclair, former Manchester City and England winger noted that not many players in the EPL and Europe do what Ndidi does.

Leicester City lost five matches out of seven when the Nigerian international was sidelined due to injury and were defeated only twice in 17 matches that he played.

“I actually looked at Ndidi and thought, there’s not many better than him in the Premier League and probably in Europe,” Sinclair said on talkSPORT via Leicestershire Live.

Sinclair believes that Ndidi, who he described as a “Really good player” is “probably underrated” and “undervalued” but certainly not by his manager, Brendan Rodgers and his team-mates.

He noted that the coach and players appreciate everything the Super Eagles star brings to the former Premier League champions, adding that “He makes them tick.”

Ndidi is currently on international duty with the Super Eagles as Nigeria prepares to take on Benin Republic and Lesotho for the 2021 African Cup of Nations qualifying matches.

Vee reacts after fan pleads to filmmaker, Kunle Afolayan to consider her for a movie role