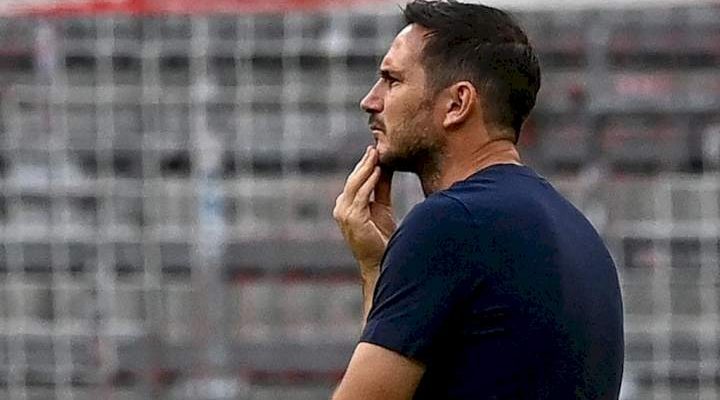 Chelsea legend, Chris Sutton, has hit out at Everton manager, Frank Lampard, over his ‘very dangerous’ comments following the Toffees’ FA Cup elimination at the hands of Crystal Palace.

Lampard watched as Crystal Palace defeated Everton 4-0 in the FA Cup on Sunday to qualify for the semi-final, where they will face Chelsea next month.

The former Chelsea manager had accused his Everton players of lacking courage after their defeat to Crystal Palace.

But Sutton believes Lampard could regret his comments, adding that he should take responsibility because his team are in an absolute mess.

Speaking on BBC Radio 5 Live, Sutton said: “He has to take responsibility – he’s the manager.

“The team are in an absolute mess, but his language was extremely strong, questioning the side’s courage.

“He talked about [how] he doesn’t have a magic wand to get inside people’s heads and change resilience across the whole squad. Well… is that not his job?

“Lampard was chucking things out there and I wonder whether he will regret some of the things he’s said because it can be damaging within the dressing room.

“It’s not a good dressing room at this time, but when you start questioning players’ courage, I think there may be a problem.

“He’s come out and slaughtered his players and yet he needs these players to keep him up, so what he said is very, very dangerous in my book. It’s a big gamble what he said and let’s see whether the players react.

“He had a difficult job to take on, most of the blame lies with [previous manager Rafa] Benitez on this one, but he hasn’t made the impact which I think he expected to – and the Everton fans expected him to.”