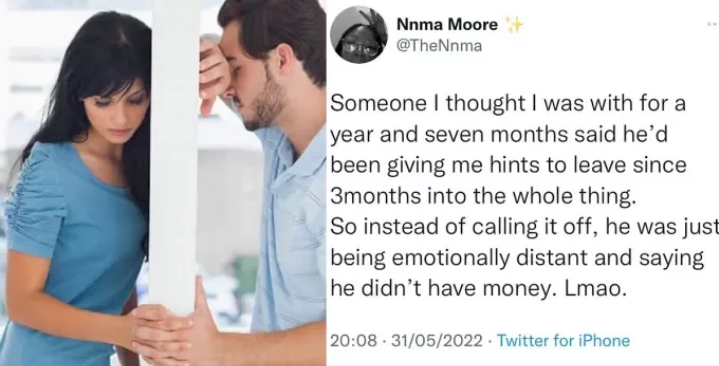 A Nigerian lady has taken to Twitter to narrate the unusual manner in which her ex-boyfriend gave her hints so she could call off their relationship.

According to the Twitter user @TheNnma, her now-ex-lover had to end the relationship himself after more than a year of dating because she didn’t get the hints.

She said he then opened up that he had been giving her hints and deliberately acting up since three months into the relationship, but she was oblivious to the signs.

“Someone I thought I was with for a year and seven months said he’d been giving me hints to leave since 3months into the whole thing. So instead of calling it off, he was just being emotionally distant and saying he didn’t have money. Lmao.

He even borrowed money (that was never paid back) from me as “hint” because he wanted me to leave him, while I was there thinking I had a boyfriend and he was going through a rough patch. Lmao.

See once the wickedness becomes casual and unprovoked, don’t try to understand again. They want you to leave, leave. Once disrespect enter, don’t let it slide anywhere. E go pain but please leave, the humiliation you’ll face in front is not worth anything you’re trying to fix.” She tweeted.