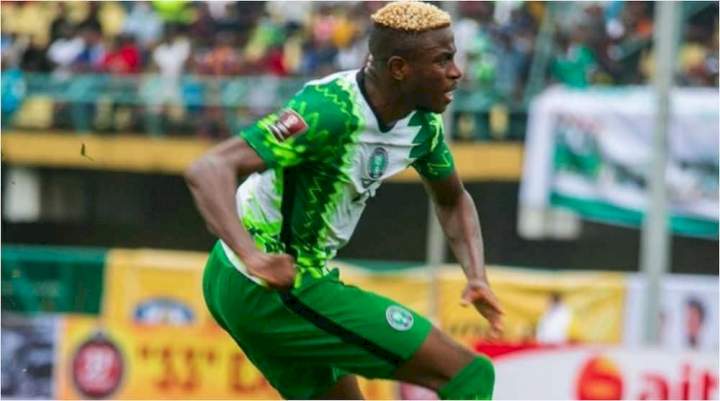 Nigerian striker, Victor Osimhen, has revealed that the Super Eagles received ill-treatment from the Ghanaian fans in Kumasi.

Osimhen said Super Eagles players were harassed by Ghanaian supporters as the team bus made its way inside the Baba Yara Stadium in Kumasi, adding that they screamed at Augustine Eguavoen’s men and hit their bus, making signs.

The Napoli attacker also said the Super Eagles were not allowed to inspect the pitch on the day of the match against Ghana.

Recall that the Super Eagles held the Black Stars to a 0-0 draw at the Kumasi Stadium on Friday night in a 2022 World Cup playoff first leg tie.

“The experience in Ghana is a bit understandable due to the African thing, but it was surprising when we landed and we had to jump down and some of us carried big hand luggage which was quite stressful for us,” Osimhen told Elegbete TV Sports on Saturday evening during Super Eagles’ recovery session.

“When I first saw it it was really funny but at the end of the day it was a good experience.

“From our hotel to the stadium is about 25-30 minutes so on getting there, there was a huge Ghanaian crowd, screaming at us, hitting our bus and making signs.

“I We didn’t even inspect the pitch like a normal game day but we are used to these kinds of things so we were not really bothered about that. It was really not professional.”

NIigeria will host Ghana at the Moshood Abiola National Stadium in Abuja on Tuesday for the second leg.