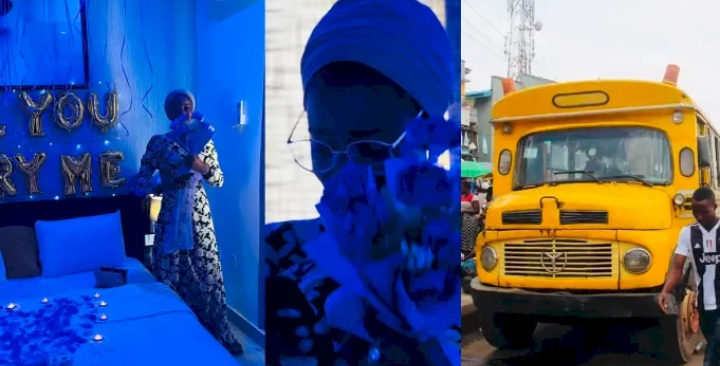 A Nigerian lady, identified as Salami Eniola, has said a big YES to the marriage proposal of a man she met inside a Molue Bus in Lagos traffic.

Eniola took to Twitter to announce her engagement on Tuesday, June 1, and narrated how the proposal went down.

According to her, they drove all the way from Osogbo to Ibadan where she’s currently doing her NYSC program not knowing that he was planning to propose to her in Ibadan.

Sharing photos from the proposal, she wrote,

“It was a long drive from osogbo to Ibadan, he said he wants to get something from his friend and since that’s where I’m serving I got no clue and sat in the car.He went in nd said we’ll have to wait a bit, poor me no nails just slippers and nice gown😂 and I said YES”

Reacting, a lady who is also trusting God for a husband, inquired how and where she met her husband-to-be so she can try it as well.

How did you meet your man?

Where did you kneel down to pray?

Which cloth were you putting on?

What did you make?

In response, Eniola disclosed that she met her fiancé inside a molue bus and they got talking after he offered her a bite of his gala.

“Where – inside molue Lagos traffic

Where I prayed -ile aanu oluwa”