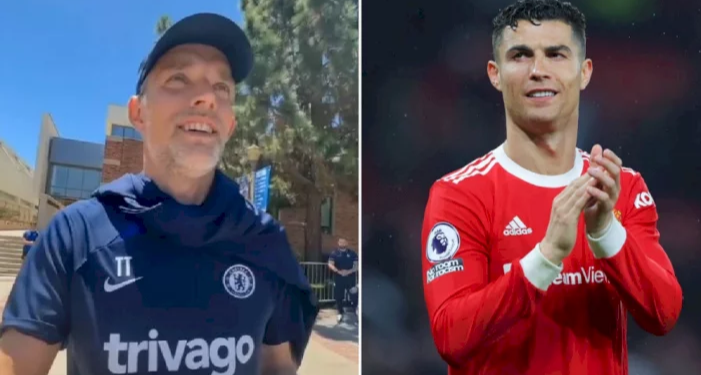 Thomas Tuchel remained coy over Chelsea’s link with Cristiano Ronaldo when asked about a potential deal by a supporter.

Ronaldo is pushing to leave Manchester United this summer and Chelsea are among the clubs who have been offered the chance to sign the 37-year-old.

Chelsea’s new co-owner Todd Boehly is understood to be open to the idea of bringing Ronaldo to Stamford Bridge in order to bolster Tuchel’s attacking options.

However, Tuchel is said to have reservations about a move for Ronaldo, with reports claiming that the Chelsea manager feels the United forward would not fit into his fluid attacking system.

Chelsea supporters are also split about Ronaldo’s potential arrival, and when asked by one fan during their pre-season training camp in Los Angeles, Tuchel gave little away.

As Tuchel was signing autographs, one supporter asked: ‘Thomas, do we sign Cristiano Ronaldo?’

The Chelsea manager smiled and replied: ‘I will not tell you.’

Chelsea, meanwhile, are on the verge of announcing their £50 million deal to sign Raheem Sterling from Manchester City.

The England international has already started his medical and is expected to join up with his new Chelsea teammates this week.