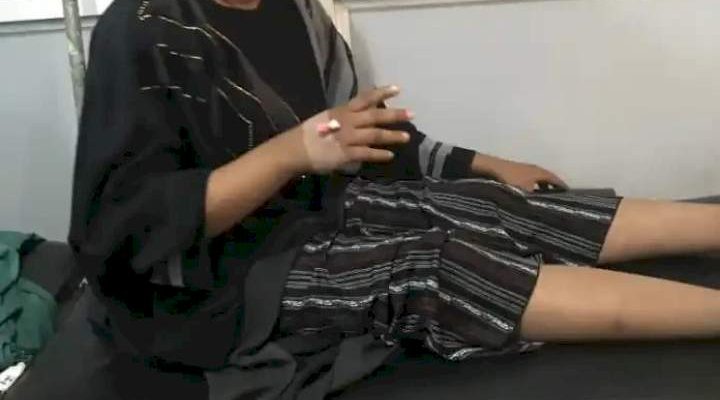 The lucky survivors of the train attack which occurred on Monday have spoken out about their ordeal.

Several persons were slain and several others were kidnapped by terrorists during an assault between the settlements of Kateri and Rijana in Kaduna state.
One of the survivors of the attack, Maimuna Ibrahim, who sustained a bullet wound in the thigh, spoke to media from her hospital bed and described the ordeal as terrible.

“I was shot on the thigh. But the bullet did not touch my bone. The bullet penetrated out of my thigh. Honestly, we suffered seriously, but thank God soldiers came and they really helped us,”.

She revealed that after she had sustained a bullet wound in the thigh, she couldn’t walk so she had to be carried out by the soldiers:

“I was unable to walk, it was the soldiers who carried me on the back to the vehicle that brought us to the hospital. They were able to pass over the cliff, carrying us on their backs! Seriously, they tried because it was not easy climbing the cliff,”

“The terrorists came, were moving about in the train, but they did not come to where I was seated. I was hit by the bullet through the window. They entered SP17. As they were shooting, the police security on the train asked us to lie down on the floor of the train so that the bullet will not get at us. Unfortunately before I could lie down the bullet hit me,”

“I saw the terrorists from the window. They were many, they were small boys of between the ages of 18 and 20. They appeared like Fulani. They wore turbans. They don’t look like Nigerians. They were shouting Allahakubar.”

Another survivor, Fatima Shuaibu, speaking from her hospital bed revealed that her sister was killed by the attack.

Amid tears, she said:

“My sister, Zainab Awal, was shot on the stormach and she died.”

Shuaibu revealed that she had been seeing flashes of torch through her window and she had thought it was the locals around there, but when she heard a loud explosion, she knew something was amiss.

“I was seated by the window in the train. Suddenly I started seeing flashes of touch light, this was around 8pm. Then there was a loud bang as if something exploded. Then the train went off track as if was falling down. We started shouting and praying. As soon as the train stopped, we started hearing gunshots.

The security personnel on the train announced that everybody should lie down on the floor of the train. They attacked the VIP couch, they abducted some people and took them to the bush, they shot other people

“They operated for about two hours or so before soldiers and Airforce arrived and they exchanged gunshots. The terrorists came with five buses and motorcycles. Those who were abducted were taken away in the Sharon buses

The terrorists were small boys of between 18 to 20 years. I saw them, they dont look like Nigerians. The soldiers rescued us in the train. Those of us who were injured were evacuated from the train. They climbed the cliff with us and took us to the expressway where vehicles were brought to carry people.”